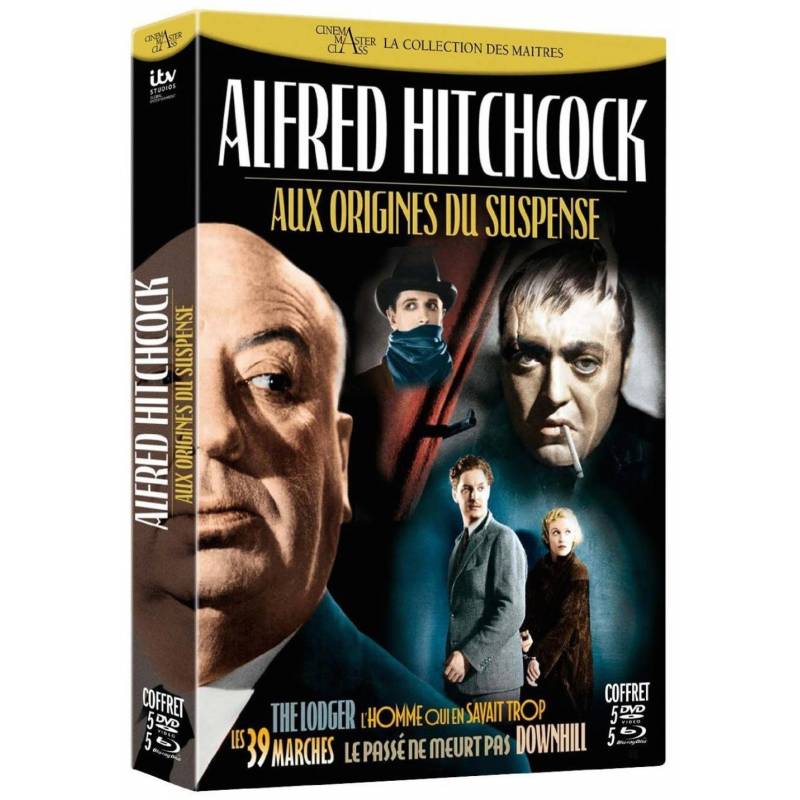 By buying this product you can collect up to 2 loyalty points. Your cart will total 2 points that can be converted into a voucher of 2,00 €.

This box contains 5 films:
- The Lodger:
While a serial killer terrifies London by addressing the young blonde women on Thursday, the host Bunting, by a night of thick fog, a new tenant. It does not take him long to fall in love with their daughter, the lovely Daisy with golden hair. And it takes even less to arouse suspicion of Joe, a detective living with them, the true identity of the newcomer. Why does not he comes out at night fall? Why does he hide a photograph of a blonde woman, a revolver, and a map of the movements of killer? The new tenant was decidedly strange habits, but is it enough to accuse him of murder?
- The Man Who Knew Too Much:
While they are on vacation in St. Moritz, Bob and Jill Lawrence witness the murder of Louis Bernard, a French spy. Before dying, he tells them that a murder will be committed at the Albert Hall. To prevent Lawrence speaking, the assassins kidnap their daughter. Helpless, they should conduct their own investigation ...
- The 39 Steps:
Richard Hannay is a Canadian crossing in London. At the end of a music hall show, he meets Annabelle, who seeks to escape secret agents. Richard agrees to hide in his apartment, but she is murdered in the night. To prove his innocence, Richard will attempt to break the spy network ...
- The past never dies:
A divorce is announced in the press: Laritta is accused by her husband, violent and alcoholic, to cheat with an artist who commits suicide face these slanders. A lawsuit ensued and, in the eyes of society, the adulterous woman is doomed. No matter his innocence or guilt: public opprobrium following the now everywhere. She decided to go into exile in France to build a life with a new identity, and falls in love with a young tennis player. Bewitched by the charms of his lover, he refused to know his past and wife. But are we really entitled to a fresh start when morals condemn us?
- Downhill:
Robby, the eldest of the wealthy family Berwick is expelled from her university for theft. He accepted the award at his school, even if it actually covers the real culprit, his friend Tim, to honor a pact of loyalty. Following this accusation, his family and his friends turn their backs and he has no choice but to go into exile to start a new life. But this is only the beginning of a long descent into hell. How far will the wrong man to honor his promise.